The MLR group is highly motivated to finding novel research solutions that can improve the livelihoods of poor smallholder farming families in the Mekong, With the prolonged upward trajectory of demand for beef animals for transport to China and Vietnam, beef production has become far more profitable than many other smallholder rural enterprises, particularly traditional subsistence rice cultivation. It is estimated that over a million large ruminants per annum are now transported across the region and into China. Our Mekong Livestock Research team has been working closely with smallholder farmers in Laos and Cambodia, encouraging them to improve the nutrition, health, husbandry and management of their animals. This increases the financial returns to smallholder families from the trade of heavier animals of improved quality and quantity, in turn, improving the food security of rural families and contributing a stronger beef market for the growth of the national economies.

The Lao government has recently signed an agreement with China to supply 600,000 large ruminants annually. This is a substantial increase on the approximately 100,000 animals that are transported across the Mekong by boat in Borkeo from countries further west, then driven to the Chinese border through Luang Namtha province, as previously illustrated in one of our blogs. To meet this increasing demand, it will be important for Lao farmers to improve their bovine reproductive management skills.

To assist this, we have recently delivered training in bovine reproduction to senior veterinary students and staff at the National University of Laos at Nabong campus, and to government staff of Savannakhet Province plus animal science students at Savannakhet University. This was similar to previous workshops delivered in Luang Prabang Province and NUOL in 2010 and 2017. The training involved Peter Alexander from Bega Veterinary Hospital with Isabel MacPhillamy and Prof Peter Windsor, plus translations from Dr Vannaphone Putthana at NUOL and Dr Syseng Khounsy in Savannakhet. The training included basic learning in reproductive anatomy, physiology, husbandry, and reproductive diseases research, delivered as lectures and discussions, with practical classes involving both reproductive tissue and live animal breeding soundness examinations with pregnancy testing.

The workshop presented our previous studies that documented that in Laos, bovine reproductive parameters are poor with low level knowledge and skills of farmers and extension staff (Matsumoto et al. 2016) . The inter-calving interval, or time taken for rebreeding after a cow calves, has been measured at between 14.5-19 months for cattle and 26 months for buffalo. This is because for many Lao cattle, calving currently occurs at the onset of the dry season in November through January. When trying to feed a calf when there is minimal feed, a cow uses her own energy reserves and enters ‘anoestrus’ (when her reproductive cycle ceases). For a cow and farmer to be able to meet the 2.5x energy demand for lactation, the cow needs to either be bred so she calves in the early wet season, or fed from irrigated forages in the dry season so she can lactate but not lose too much weight. However, as lactating cows need to consume ~10-15% of their body weight with fresh forages daily, feeding for a dry season lactation is very demanding.

Our practical training classes emphasised the importance of closely monitoring the body condition score (BCS) and conducting breeding soundness examinations for cows (CBSE) and bulls (BBSE). Attendees learned that the BCS is measured on a scale of 1 to 5, with 1 being very skinny and 5 being very fat or obese. Breeding cows perform best when the BCS is maintained around 2.5-3.5, although even well fed cows may lose between 1-1.5 units of the BCS when lactating. Animals that are being fattened for beef should be BCS 3.5-4. As cows that are above BCS of 4 may have trouble calving, excessive weight for a breeder should be avoided. A fat breeder is often a sign that the cow missed getting in calf or has lost her calf. Breeding soundness examinations of both bulls and cows should be done routinely before selecting which animals to retain in the herd and breed from. Animals that do not pass the breeding soundness exam should not be kept as they will be wasting the limited resources on a farm.

Dr Peter Alexander assisting one of the students in Savannakhet to remove his rectal glove (Photo: Peter Windsor)

The attendees were introduced to the benefits of pregnancy testing as a useful step in improving the management of cattle reproduction. This training was very popular with the attendees, with both ‘empty’ and ‘gravid’ cows examined ‘per rectum’. This examination determines how many cows are pregnant and enables separation of non-pregnant cows. Cows that consistently do not get pregnant and return to heat after several attempts at breeding, should be culled. The pregnancy test is part of a reproductive examination to identify cows that are fertile and also, readily identifying if the bull(s) or AI services have not been adequate to ensure that most cows are in calf. If the bull is infertile it can be rapidly replaced. We emphasised that only individuals with many years’ experience are expected to successfully diagnose pregnancy in cows under 8 weeks pregnant. We also covered numerous additional topics in the training, including: Calving management, calf health and weaning; Heat detection; Artificial insemination; Bull selection; Dystocia management; and the reproductive diseases Neosporosis, Leptospirosis and BVD (Bovine Virus Diarrhoea) diagnosis and management. 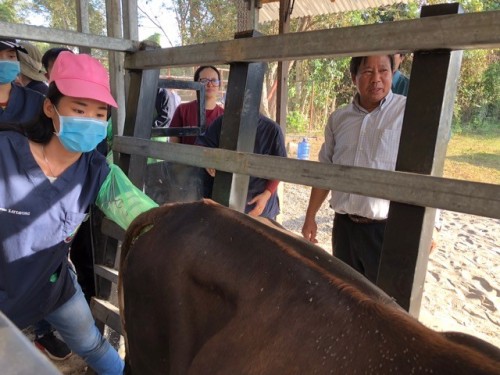 A student at the Nabong campus for the National University of Laos practicing pregnancy diagnosis via rectal palpation (Photo: Peter Windsor)

Considerable discussion was generated on the development of a Reproduction Calendar for Laos. A proposed reproduction calendar was provided as this is a useful tool for farmers to plan the mating of their cows. The calendar can be altered to suit the feed and farmer availability, but the crucial message is that cows need to calve when there is increasing high quality feed available that will persist for the next 3-4 months. This ensures the cow does not lose excessive body condition during lactation and will come into heat faster and will be able to successfully become pregnant sooner. 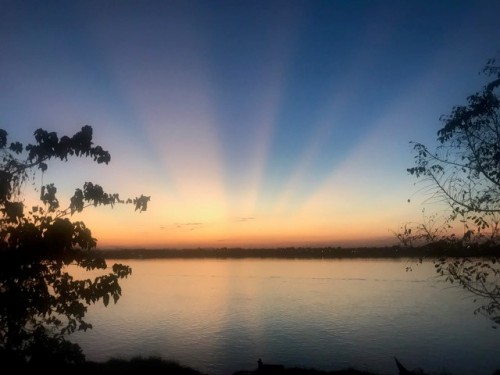 The stunning sunset we were greeted by when we arrived in Savannakhet (Photo: Peter Windsor).

Following the Savannakhet visit, Drs Peter Alexander and Syseng Khounsy drove to Pakse to examine cattle production in southern Laos. This also included a visit to Wat Phou, the most northern temple of the historical Angkor Empire and older than the more famous temple of Angkor Wat near Siem Reap in Cambodia. The temple is one of the oldest archeological sites in Laos and involves a walk up steep steps to reach the top with some spectacular views.

The trip to Laos was completed with a workshop to update partners on the progress of the Australian Business Partnership Platform (AuBPP) project which involves USyd, the DLF, 4 Season Company and DFAT. This project officially commenced in October 2017, with a brief overview of the project provided in our annual newsletter. Trials with 8% urea blocks have recently been completed and a trial with triclabendazole medicated blocks is currently commencing to assess the efficacy of this approach to control liver fluke. At the start of the workshop, we visited one of our trial sites to allow our partners at Palladium and DFAT to gain a better understanding of the farming situation and interview farming families to more fully appreciate the potential impact that these block can have on smallholder livestock productivity and livelihoods. Our project partners at 4 Season Company have been busy scoping out potential factory sites in Vientiane as well as building relationships with local block ingredient suppliers, and we all hope to see the beginnings of local production in the coming years. 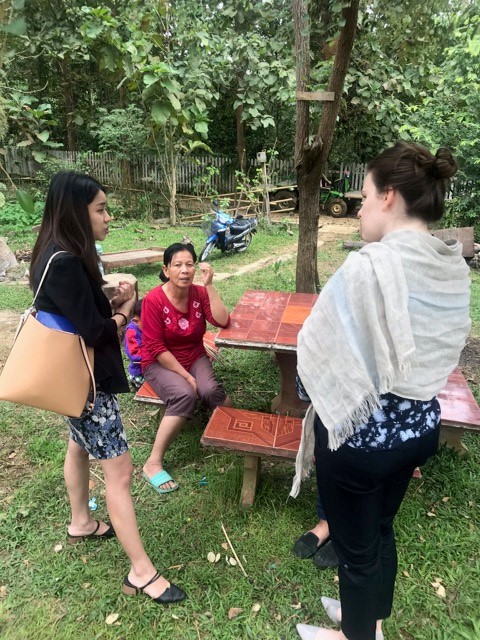 DFAT and Palladium members talk with one the project farmers about the benefits of the blocks for her farm.